I have an issue with the idea that the function of Sales Support/Enablement is required to justify their ROI. I think the focus should be not on ROI, but how effective and efficient they are. To do so requires valid measures of performance.

10 years ago, effectiveness was generally measured by volume and win rate. On some outlier occasions, 'proposals submitted on time' was also a measure.

Global telecommunications company, 300 offices in 75 countries and around 200,000 employees.

BMI was engaged to transform the bid and proposal function within the Asia Pacific region. As is often the case there were basic metrics around the performance of the function including volume of bids submitted, win rate and % of bids submitted on time. Volume was high, submission rate was 100% and win rate was low.

Our approach was to employ initiatives we knew through praxis were likely to improve the win rate which was 18%. We forecast success, but success could not be guaranteed.

We worked with the organisation to:

Global Information Technology company, over 800 offices in 94 countries and around 300,000 employees.

In this scenario, we had the distinct advantage of being able to commence the deployment of our Bid Metrics solution by collecting baseline data. We then employed improvement initiatives with the objective of ensuring proposals were submitted with an exit score of higher than 6.3 (a number we have validated is required to be competitive in the next phase of procurement).

As a way of explanation, Bid Metrics is a series of measures that are proprietary to Bid Management International. As a foundation, we base our measure of proposal quality on what Buyers use to assess proposals. There are many other aspects that we believe are important in assessing proposal quality but we specialise in solutions that focus on the Buyers' context.

The BMI Bid Scorecard - give the buyer what they want 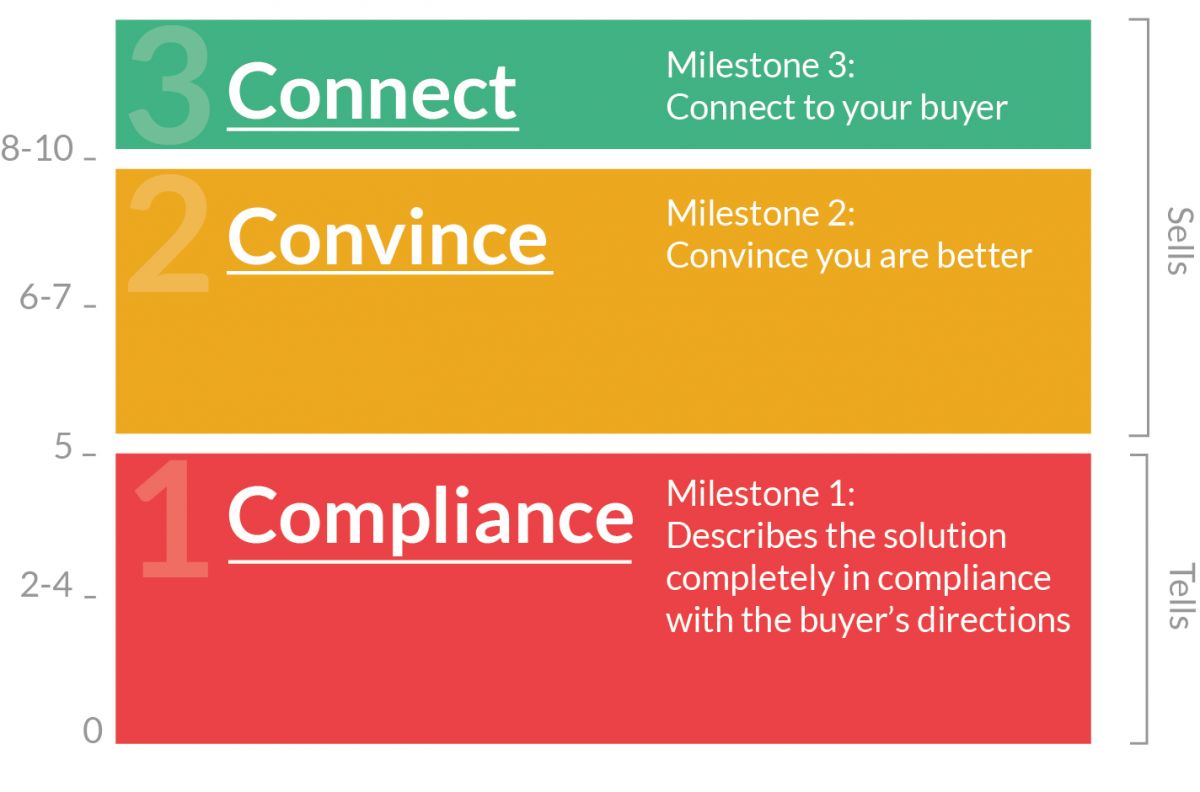 We develop and measure proposals based on the same tools used by Buyers. The BMI Bid Scorecard is based on standardised technical requirements evaluation scoring used by the UK and Australian Public Service, US Federal Agencies, UN System agencies such as the World Bank and World Health Organisation as well as the private sector globally.

We review and evaluate proposal drafts at 3 Milestones within the bid timeframe. These 3 Milestones occur at 60% (M1), 76% (M2) and 90% (M3) within the 100% of available (or Bid Elapsed) time measured from Kickoff to Submission. There is a science to when these occur - they are designed to reflect traditional activities within bid development. 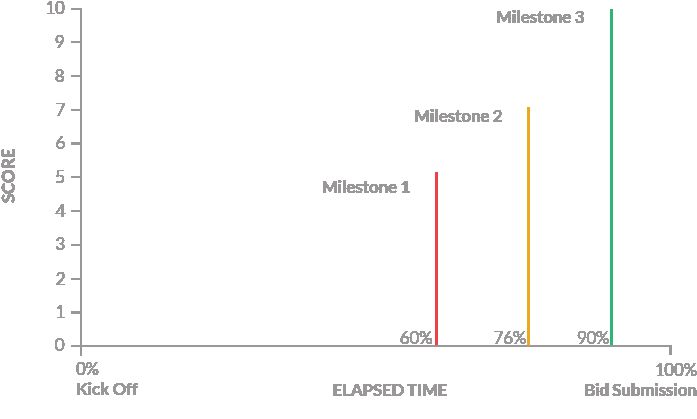 Our Evaluators have extensive industry experience in procurement evaluation in Defence, FSI, Not For Profit, Healthcare, Technology and Communications and Construction.

We score responses and provide feedback for improvement which is broadcast to SMEs via our web-based platform. All Executives and Bid Team members can track the status of the proposal via the Bid Metrics dashboard.

Using data from 12 bids we established that the baseline proposal performance as follows:

We then implemented proposal improvement initiatives on a further nine deals. 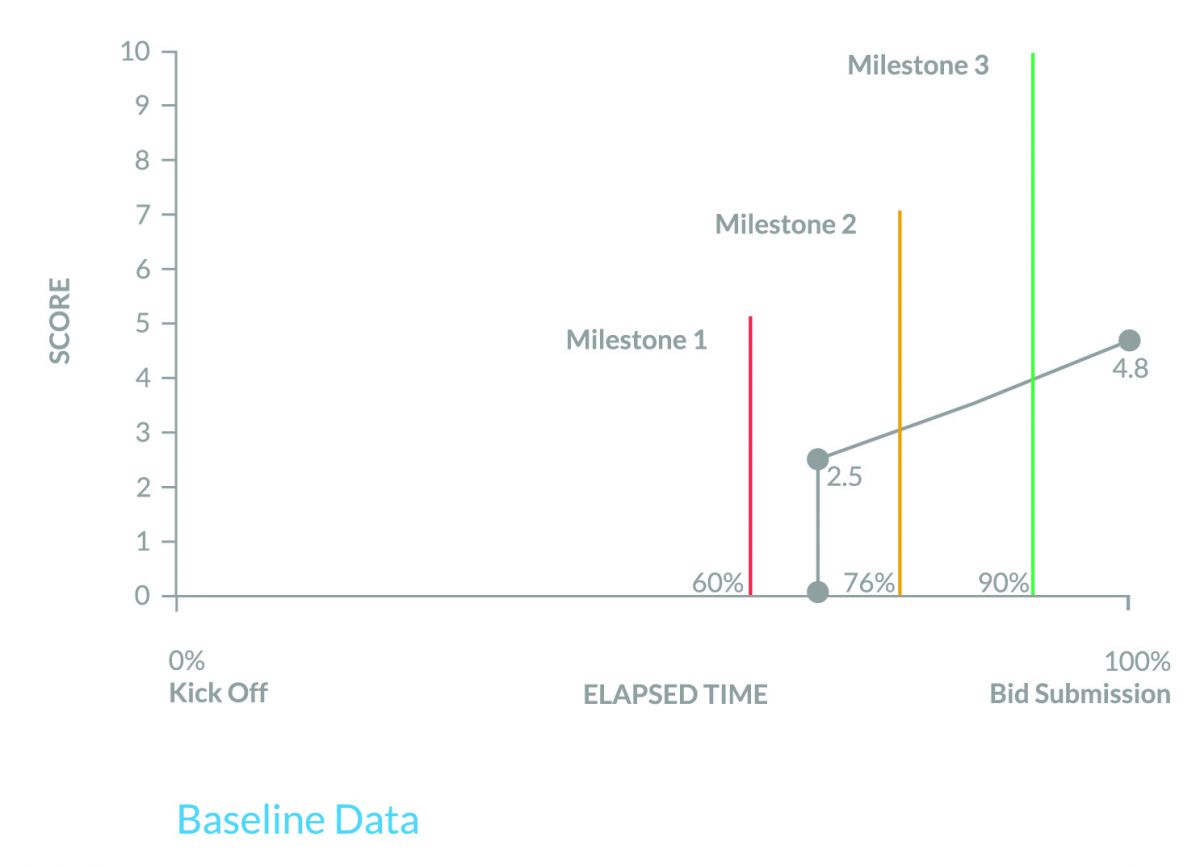 Our first action was to educate the Subject Matter Experts on what constitutes a high scoring response in a purchasing evaluation context. We did this as part of the bid project.

The expectation was then set that responses would be reviewed by third party evaluators at points of time through the bid timeframe (Proposal Milestones).

Drafts of the solution were written as guides to the team for developing their responses.

On those bids where the above process was adopted, Exit Scores were submitted above 6.3 and the bid was successful. For the others, the predicted loss became a reality. 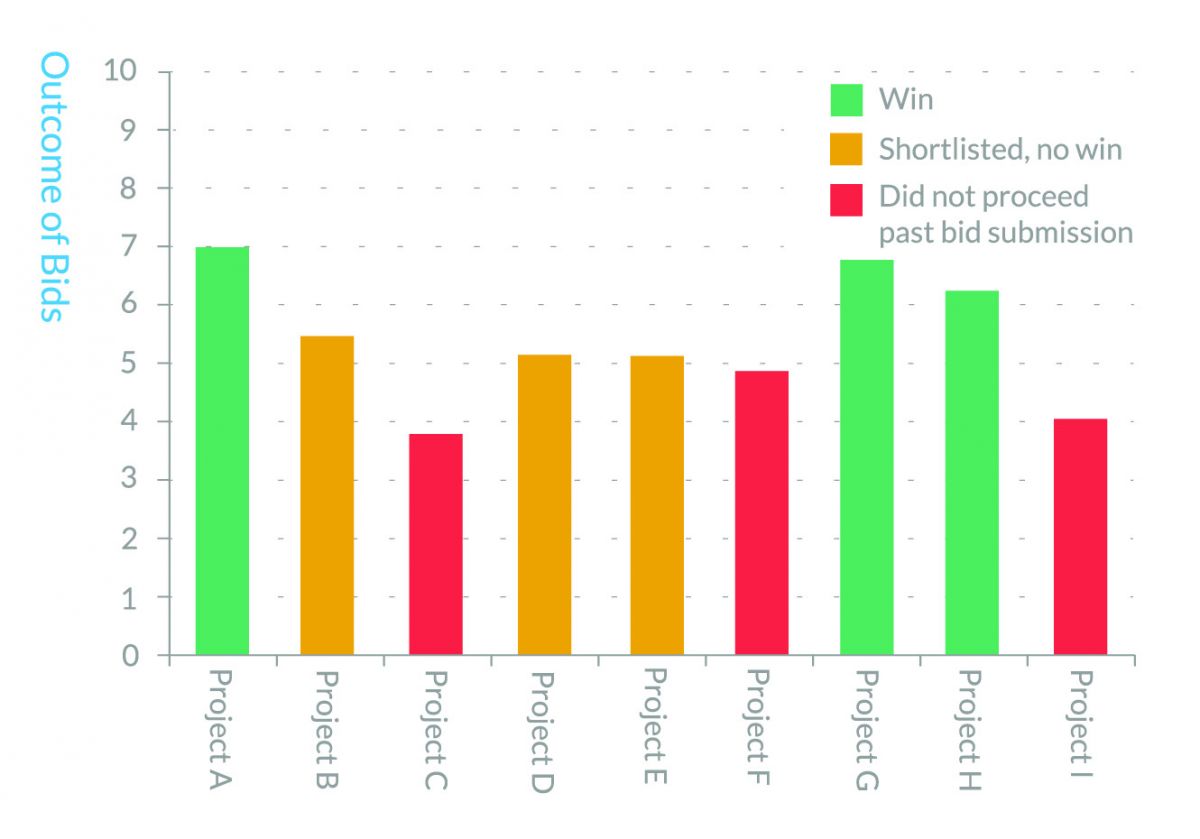 On successful bids, the proposal development cycle looked something likes this: 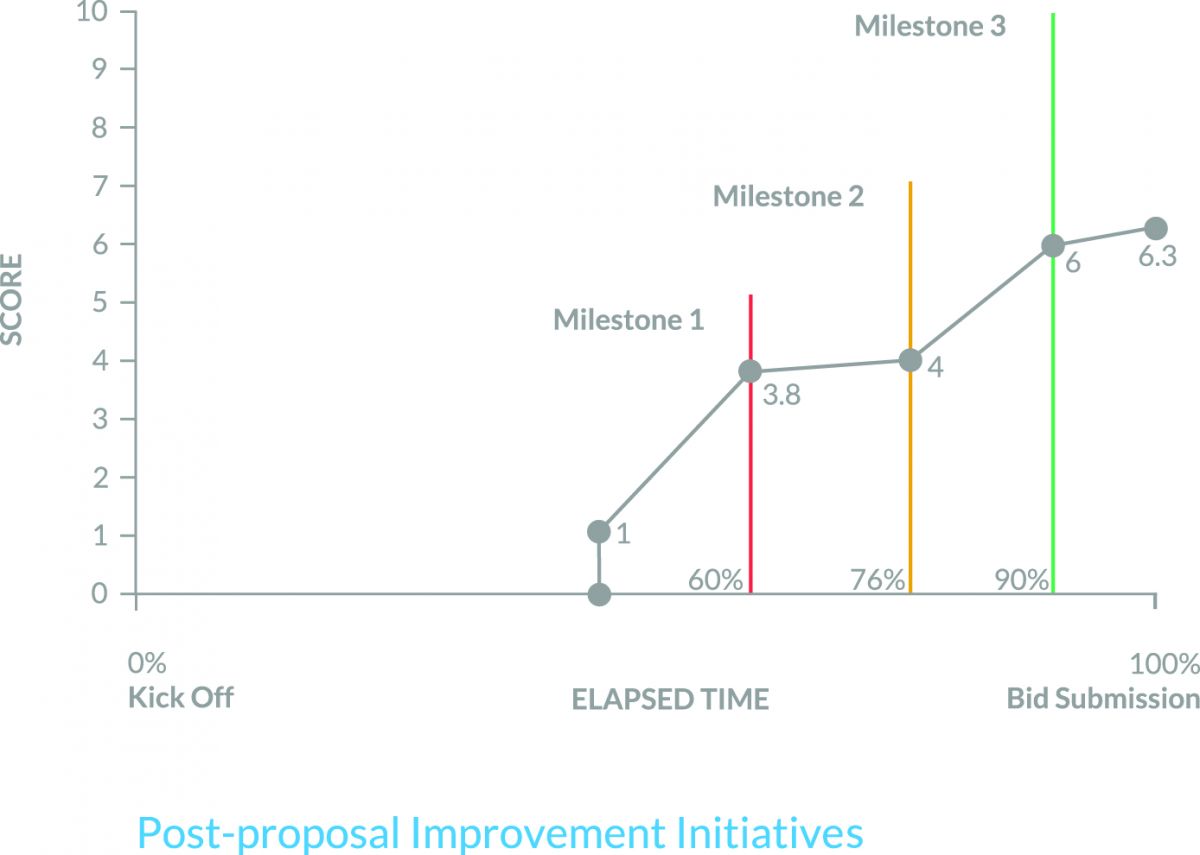 Why were these initiatives successful?

People need to know what success looks like. If it isn't viewed through the lens of the Buyer, then the chances of success are reduced.

Having an independent, qualified third party to apply a numerical worth (and guidance for improvement) on a response both mimics the process the proposal will be subjected to post submission and leverages the Hawthorn Effect - a type of reactivity in which individuals modify, or improve, and aspect of their behaviour in response to their awareness of being observed.

Over the past two decades we have seen the proposal increasingly treated as an afterthought, not an artefact of the bid process. We are of the view that the entire purpose of bidding is to produce a winning proposal. It is not to undertake a series of internal-facing activities and arrive at the end of the Bid Elapsed Time and throw a document together. Changes our clients employed to reduce this focus and effort overload included simplifying governance processes, requiring articulation of the solution through the proposal from the early stages of the bid and dedicating SME time to proposal development.

Much research has been conducted on the value of the iteration in producing quality written material. Multi-draft composing contained within predetermined Proposal Milestones requires SMEs to write successively improved drafts of a single response between periods of feedback from evaluators. It forces and mechanises the act of revision: a skill long associated with good writing.

Knowing where they are against a target with enough time to change the current reality moves the team from passive participant to active controller of the outcome. It provides the organisation with lead time indicators and actionable insights to steer the proposal into winning territory.

Download a copy of our Measuring Effectiveness of Proposal Improvement