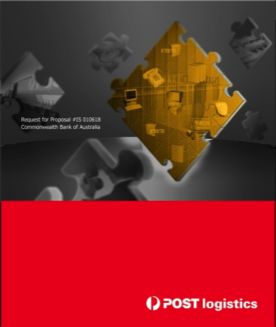 Bid Management International (BMI) was introduced to Australia Post (Post) by way of an existing client in 1998. Under pressure from the combined forces of contestability and contracting revenues from traditional revenues the organisation needed a solution to responding to tenders. And they needed to gear up to manage a contestable environment.

BMI was at first engaged to produce responses to formal requests for tender for Post Mailroom Solutions (later Decipha: a joint venture between Post and Pickfords Records Management). The organisation had not been required to compete for business in the past therefore it had none of the characteristics of an organisation that lives in a competitive world in particular its pursuit process was rudimentary.

After several significant successes we expanded our services to Messenger Post (Courier). After initial analysis it was determined that the success of both these business lines relied less on their tendering expertise and more on the articulation of their value proposition. The scope of BMI’s engagement was increased to include win strategy and solution development.

The Post Bid Centre managed up to 5 bids concurrently and produced 50 bids per annum. Its success rate was 78.5%.